Due to the pandemic and the resulting cancellation of the FRC season, there will be no World Championships in 2020. We are preparing to regroup during the 2021 season.

PCH Championships were cancelled, with only Woodie Flowers, Volunteer of the Year, Deans List Finalists, and Chairman winners being named in the spring. We competed for the Chairman award, as a result of our Columbus win and Maggie F competed for Dean's List, however we weren't selected for 2020. We are so thankful for the opportunities we did get this year.

The Columbus event is special each year, especially because our friends and families get to see us compete.. Unfortunately, the night before load in, PCH put the season on indefinite postponement and later cancelled. We were mostly disappointed to miss out on seeing our alumni who were visiting and to miss holding the Tech It Out Challenge for Muscogee County and other local schools.
A few weeks after Columbus was scheduled, the judges selected winners for Dean's List semi-finalists and for Chairman winner. CSP was happy to have Maggie F selected as our third ever Dean's List semi-finalist and to be selected as the Chairman winners for Columbus. We are so proud of this team and of Maggie for their successes this season.

Our first competition was held in Gainesville, Ga during Week 1. It was Kyber's first competition, and she performed beautifully. She climbed consistently all weekend, and she was the most consistent and highest scoring autonomous for the weekend. In the end of qualifications, CSP was ranked 2nd. We were selected the The Commodores to join the 1st seed alliance, and our third team was Ignite. Our alliance was undefeated in the playoffs, with Kyber showing off a bit in the semi-finals by climbing with one arm in two seconds! She's quite a beautiful girl. Best of all, we won the Gainesville event for the first time ever! It was a great start to the season, especially since we were also selected as the winners of the Excellence in Engineering award, sponsored by Delphi. It was a great weekend, and a terrific way to break in a new robot and a new flag.

Kick off is scheduled the first weekend of 2020. We sent a mentor to Albany to pick up the KoP, and we held kickoff in HQ. It was so cool to see so many actors from Star Wars included in the event. After kickoff, we spent the day reading rules and brainstorming. In the end, we decided to focus on shooting (high) and climbing (balanced). From there, the season was about designing, testing, and practice.

This summer, we settled in and started expanding in our build facility, which we call HQ.. We have a full building, including a  full field in the gym. We had fifty students decide to join CSP so we decided to formalize a process we'd planned to implement years ago finally -- we made FTC team(s) as a Junior Varsity for FRC4188, allowing students to be trained in a real-life environment and to try out being part of CSP in an environment similar to build and competition season. This was an amazing change to CSP and it allowed us to get the team set for 49 students.
Instead of starting back with helping all of the local FIRST teams, MCSD formalized FIRST Robotics within the district. We are happy that the District added this process to over 50 teams (25 schools). This program will allow for expansion to other schools, and the implementation of expansion shadow programs for middle and south Georgia. So many great new programs are possible to expand FIRST in communities who haven't gotten involved with FRC. We are are glad to see the growth of FIRST making such huge progress under the support of our Superintendent. We're convinced that further growth is still possible, and we can't wait to help out teams who need it. 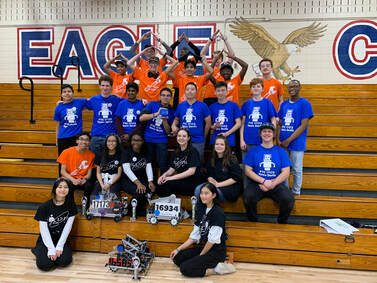 This year, CSP started three FTC teams to join the six in town. We traveled to Brookstone to compete four times, and then to District competition. We worked with SASH and with the Brookstone teams and the team from Harris County and from Manchester to find new ways to work and expand in Central Georgia. We competed all fall, with support from FRC veterans and FRC mentors. These competitions culminated in a win for our Team Ecliptic (our all female team) in Regionals, and a finalist win for the Space Devils. Not to be outdone, the Astrobots were winners for Creativity. We are really proud of our teams

Columbus Space Program has a second-year dedicated FLL team, called the CSP Space Cadets. This team had aged out except for two students from the previous year, which meant starting from scratch. The advantage is that the team was managed, coached, and led by FRC mentors. It was a challenge having young team members with little experience, however the team functioned and allowed our students to grow in leadership.

DREAMS-30 was held in the summer of 2019. This was run with the FRC teams and sponsors for 13 organizations. The flight went to over 100,000 feet and we had a great recovery. CSP had students with one year experience in all but one role for the flight, and we were excited to have such a great flight.

With such a huge graduating class in 2019, we decided that we wanted to create a new banner wall for colleges represented by our alumni. We started out with a few colleges, to include Georgia, Vanderbilt, and Georgia Southern, however we received banners from alumni all season long, to include Georgia Tech, Columbus State, UCF, and MIT. After our alumnus, Pranam C, achieved his PhD from MIT this spring, he promised us a Harvard banner this fall. Pranam will be teaching there as a professor in the fall, and we are excited to add this new school.

In the middle of the fall, we are always excited to go to GRITS. This year, we got to head to Atlanta for competition in October. We had a good weekend. We had an all new drive team, competing for the first time. But in the end, we unfortunately didn't win. Our rookies had a great experience with scouting, and we were able to practice many of our new 2020 competition practices -- pit team, drive team rest, and cheering for an alliance no matter how the games go. We are so excited to see this team grow and become more this season and are already looking forward to competition.