Let's hope we can qualify for Worlds!

We will be trying to qualify for State.

The Columbus event is special each year, especially because our friends and families get to see us compete.. This a particular opportunity for local students to see robotics at the FRC level.

Our first competition will be held in Gainesville, Ga during Week 1.

Kick off is scheduled the first weekend of 2019. We'll be attending in Albany.

This summer, we were moved from Marshall Middle School to a new facility - one under control of Muscogee County. It's the STEAM Center, which we call HQ.. We have a full building, including a  full field in the gym. We then started with training of our members - all fifty of them! A formal training program was instituted and formalized as part of the program.
Instead of starting back with helping all of the local FIRST teams, MCSD formalized FIRST Robotics within the district. We are happy that the District added this process to over 30 teams (20 schools). This program will allow for expansion to other schools, and the implementation of expansion shadow programs for middle and south Georgia. So many great new programs are possible to expand FIRST in communities who haven't gotten involved with FRC. 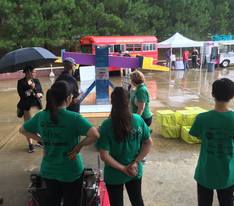 During the fall, Fort Benning held Bot-Oberfest. This was an event to celebrate the centennial of Fort Benning, as well as to welcome robotics programs to work with the Army. As part of our

DREAMS-28 was held in the summer of 2018. This was in conjunction with the Governors Honors program.

In the middle of the fall, we are always excited to go to GRITS. This year, we got to head to Gainesville for a full weekend in October. We had a good weekend. But in the end, we unfortunately didn't win == in fact, we were 2-5 but allowed to join the first alliance and WON. We did win the Spirit Award, also getting us one of the cool Automation Direct trophies. Our rookies had a great experience with scouting, and we were able to practice many of our new 2019 competition practices -- pit team, drive team rest, and cheering for an alliance no matter how the games go. We are so excited to see this team grow and become more this season and are already looking forward to competition.